After the birth of my first child on 29th April, 2013, I had an internal bleeding, and the blood instead of flowing outside, gathered together in my stomach and formed a hard substance like a stone, that was when my problem started. I went to St. Patrick's Hospital, Onitsha, and had a major surgical operation in order to remove the blood lump clot. But the doctor on opening my womb found out that my case was complicated and was beyond his experience. So, he stitched my stomach without removing anything. At St. Patrick's Hospital, I did not eat or drink anything for 12 days but was on drip throughout. Later, the doctor referred us to Teaching Hospital, Nnewi but on the instruction of the Prophet of God, Daddy Hezekiah, we went to New Hope Hospital, Onitsha. At the hospital, I was injected to know whether the blood collection would flush out but to no avail. Dr. Nnanna booked me for another major surgery. He invited two other specialist surgeons who were experts from Bayelsa State to help him because my condition was critical and deteriorating. After the surgery, I stayed for another 13 days without food or drink but on drip, because I had a twisted intestine caused by the formation of blood lump in my stomach. I experienced severe pain all over my body. Then, when I started eating, it was controlled by my beloved Daddy Hezekiah, who directed me to take 3 spoons of water for a start, then after some minutes, 4 spoons of water and afterwards, a sachet of water followed by 3 spoons of pap and 4 spoons, respectively to complete it seven spirits of God and he asked me whether I was having any problem, I said, no. Then he said, “Happy survival”. Honestly, I suffered because I underwent two major surgical operations within the period of one month.

In August, 2014, a year and 4 months later, I took in. When the pregnancy was 4 months old in January 2015, I started having a terrible stomach upset to the extent that any solid food I ate would be thrown up. I went to Divine Mercy Hospital, Awada, Onitsha and the scan showed that I had twisted intestine and bowel obstruction, that my baby cannot be fed comfortably through the umbilical cord, and that the baby should be removed in order to rearrange my intestine and save my life. But because they did not have enough equipment, they referred me to Borromeo Hospital, Onitsha.

But Daddy told us through Disciple Oge Ezembaoma to go to New Hope Hospital which handled my case previously. Daddy also told my husband that if money would be his problem that he would start sponsoring it. At the New Hope Hospital, the devil struck again but the God of Daddy Hezekiah intervened. I stayed one month in the hospital taking only drip, due to excessive vomiting. It was towards the end of January that I started taking tea, pap and orange juices. The doctor said that I would be delivered of my baby through surgery but I was afraid to do another surgery. So, I went to the Temple of God on a Friday and took the water used in scrubbing the temple from the position where Mummy Chukwunazaekpere used to stay during church services and with my whole heart, I prayed and begged God that I would not want to undergo surgery again. So, I used that water as Dettol in my bath water. Fortunately for me, on 22nd May, 2015, during child dedication, Daddy laid his hands on my stomach and prayed for me, and asked me “how many months”, I told him nine, then he said that I should let him know of every new development.

Five days after Daddy's prayer, I was delivered of the baby safely without Cesarean section. Then, this baby that was delivered was the one who excreted a bullet mysteriously. Immediately he was born, he started having severe stomach upset, always crying and rolling himself as someone who is in a terrible discomfort. When he was a year and 3 months, after Temple Mothers' Day, my husband could not wait for me, so, he took my children home. The baby was wearing napkin that early Monday morning. I removed the napkin, put it in a bucket in order to wash it. Surprisingly, I heard the sound of a metal in the bucket and I inspected it, behold, it was a bullet that my child defecated. I was filled with awe and wondered because I did not know how the bullet entered his stomach. Shortly before he defecated the bullet, he took ill seriously and was on drip and his whole body was swelling. I called his name Ikechukwu, because without the power of God both of us would have been dead by now. I thank Daddy Hezekiah, for saving my life and for being beside me throughout the period of my trials and temptations.
Mrs. Uju Igbudu 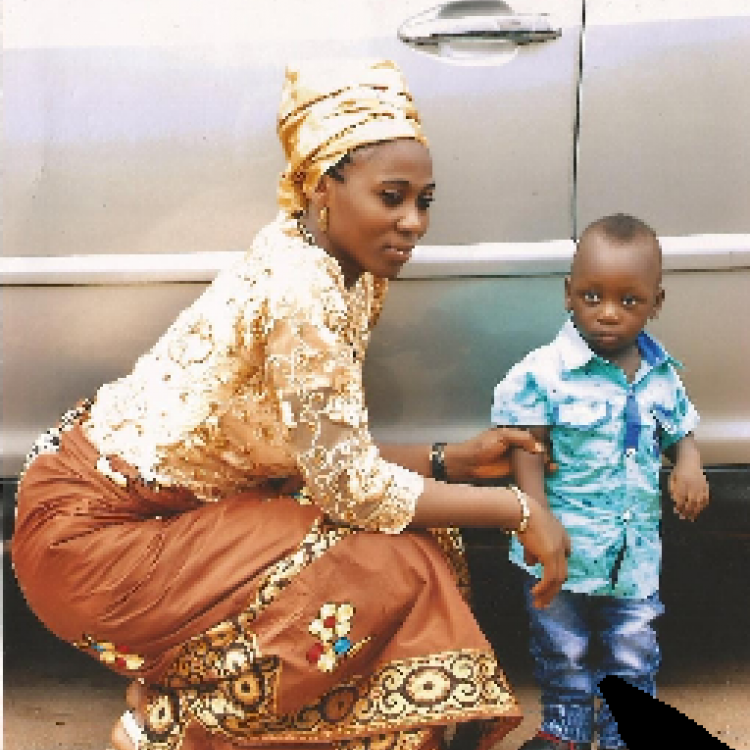